Experience our unique and carefully planned tours of Sri Lanka which let you relax and explore the country’s well-known cities. Enjoy the guaranteed satisfaction with Unique Paradise Travels.

Detailed programme of the Tour 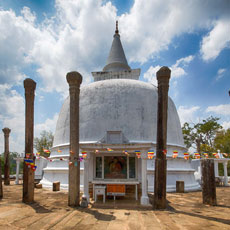 Arrive in Sri Lanka in the style you deserve, greeted by your chauffeur guide and transferred directly to Anuradhapura – the island’s first capital of Sri Lanka was founded in 380 B.C. by King Pandukahabaya center where your journey begins.

After arrived to Anuradhapura, check-in to your hotel and spend some time at leisure. In the evening explore the wonders of Anuradhapura and its unique historical sites. 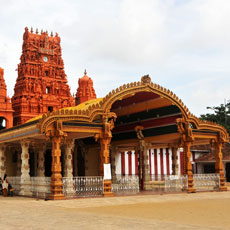 Located in the northernmost region of Sri Lanka and perfected by the surrounding vistas of the Indian Ocean and Jaffna lagoon; this part of the country bequeaths a fascinating mix of colonial charm and Sri Lanka’s Tamil culture. The enthralling, unimposing and pristine ambiance of Jaffna undoubtedly confers it as a rewarding place to invest a few days discovering the Sri Lankan Tamil culture. 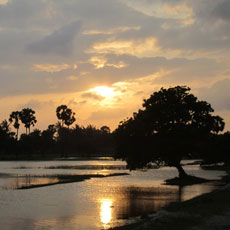 Jaffna displays a strange mix of both colonial and South Indian architecture and is a wonderful experience for those interested in exploring the fusion of cultures. Flocked by Hindu kovils and Catholic churches; the succeeding attractions are some prominent attractions/events you could visit during your stay.

The Fort in Jaffna was originally built by the Portuguese colonists and this was their last stronghold when the Dutch overran Colombo.. Another fort was built on the Kayts Island located just off the coast of Jaffna by the Dutch and called Fort Hammenhiel and lies at the entrance to the Kayts Harbour.

Jaffna is full of Hindu Kovils and the Nallur Kandasamy Kovil and Vallipuram Kovil at Point Pedro are two of the prominent Kovils in the region that hold colorful festivals every year.

The Buddhist Vihara at Nagadeepa (Nainativu Island) is a place sanctified by the visit of the Buddha and the dagoba is said to date back to ancient times. The Nagadeepa Temple is reached via a ferry ride.

The Dutch and Portuguese were prolific church builders in their attempt to spread Christianity in their colonies. A number of ruined Portuguese Churches can be found at Myliddi and Chankanai and a ruined Dutch Church at Atchuveli. If you interested in ravening for a truly local experience, you can either indulge in a home stay with a local family or learn to cook a truly authentic Jaffna delicacy followed by a scrumptious lunch with a local family!

Some other notable attractions include a visit to the infamous Jaffna Public Library, lively Jaffna Market, Delft Island, Dambakola Patuna and Sangamitta Temple.

Do not forget to indulge in the infamous fiery red Jaffna crab curry and Odiyal Kool (a seafood broth) and some of the mouth-watering authentic Jaffna curries accompanied by some signature Jaffna delicacies as dosai, roti, string hoppers and Pittu. 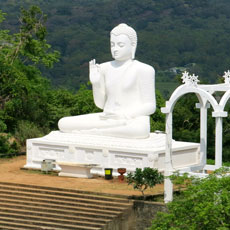 After breakfast, our sightseeing tours of Sri Lanka continue to the town of Habarana, within the country’s rich cultural triangle. En route visit Mihitale Temple, which is a mountain peak near Anuradhapura in Sri Lanka. It is believed by Sri Lankans to be the site of a meeting between the Buddhist monk Mahinda and King Devanampiyatissa which inaugurated the presence of Buddhism in Sri Lanka. It is now a pilgrimage site, and the site of several religious monuments and abandoned structures.

After visit transfer to Habarana.

Check in to the hotel and spend the rest of your evening at leisure. 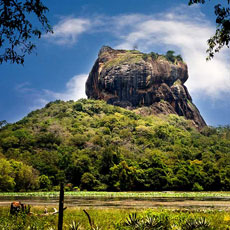 After breakfast, our sightseeing tours of Sri Lanka continue to the town of Sigiriya, within the country’s rich cultural triangle. Climb the rock fortress of Sigiriya – a 5th Century “Fortress in the Sky”.

After visit transfer to explore Polonnaruwa and the island’s ancient highlights in the Cultural Triangle.

Return to the hotel and spend the rest of your evening at leisure. 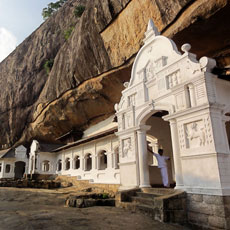 After breakfast you will drive towards the old capital of Sri Lanka - Kandy. On the way you will stop at the well-known Dambulla Cave Temple anther UNESCO World Heritage Site, one of the most famous cave complex of magnificent Buddha Images and Rock Paintings of vivid colours and shapes. Afterwards, you will continue onwards and stop at a Spice garden in Matale. Once arrived to Kandy you will visit the renowned Kandy Temple, also known as "The Temple of the Tooth", where the tooth relic of the Buddha lies. Once you have soaked in the calming atmosphere of the temple you will be taken to the lively sounds of the traditional Kandyan dance performance. 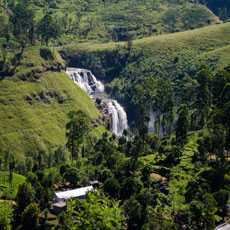 Once you have enjoyed the relaxed morning you will continue your drive towards Nuwara Eliya, also known as the “Little England” of Sri Lanka because of its quaint British type cottages, set amidst verdant hills. Sri Lanka’s tea growing centre and enroute visit a tea factory. During the drive relish the endless views of tea carpeted valleys and the bright flash of female “tea pluckers” in their pimento, fuchsia and cerise saris. Enjoy a guided stroll of Nuwara Eliya town, pass the 18-hole golf course, the colonial members only Hill Club and English styled country homes. 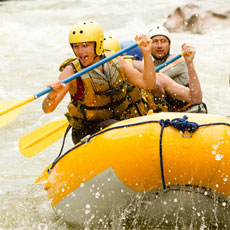 After breakfast drive to commercial capital of Sri Lanka through Kithulgala. Kitulgala is a small town in the west of Sri Lanka. It is in the wet zone rain forest, which gets two monsoons each year, and is one of the wettest places in the country. However, January to March is the dry period that makes Kitulgala one of Sri Lanka’s foremost tourist attractions for those who love White Water Rafting.(depend on the condition and water level you can book with us the water Rafting activity as optional)

Continue to Colombo, Colombo is the most populated city in Sri Lanka, and the economic capital. It's a city with varied architecture from its long colonial past. You can have nice city tour and if wants do some shopping. 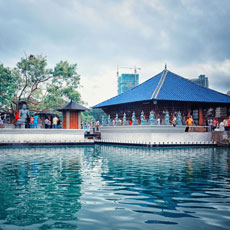 Though it will be difficult to say goodbye, all good things come to an end. Your representative from Unique Paradise Travels will meet you on time at the hotel lobby to return you by way of a scenic drive to the international airport for your departing flight and a safe journey home.